Trending
You are at:Home»World News»Front National makes no gains in final round of regional elections

France’s far-right Front National has failed to win control of any regions in the final round of local elections despite a historically high score in the first-round when it was ranked as the most popular party in France.

The defeat of FN was down to mass tactical voting, an increase in turnout and warnings by the left that what it called the “antisemitic and racist” party would bring France to its knees. All this combined to stop FN translating its huge first-round score of nearly 28% into the overall control of any region. 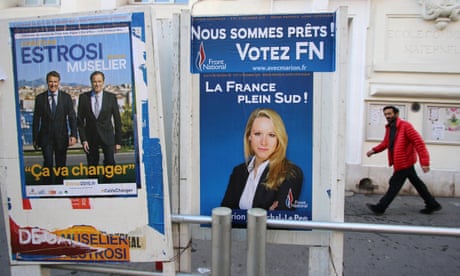 ‘Anything but Le Pen’: French turn to tactical voting to stop far right

But the far-right party still won a record number of votes in the final round: at least 6.6m, handing a significant boost to the party leader Marine Le Pen’s bid to run for president in 2017.

The Socialist prime minister, Manuel Valls, deliberately avoided any triumphalism. “Tonight there is no relief, no triumphalism, no message of victory,” he said. “The danger of the far right has not been removed – far from it – and I won’t forget the results of the first round and of past elections.”

He said it was now the government’s duty to “listen more to the French people” and “to act in a stronger, faster way” particularly on employment in a country with record joblessness.

He conceded that tactical voting was not enough to counter the far right and win support: “We have to give people back the desire to vote for and not just against.”

Exit polls on Sunday night showed that, with less than 18 months to go until the next French presidential election, the nationalist, anti-immigration, anti-European FN still gained hundreds of regional councillors across France — tripling its presence on regional councils and extending its nationwide reach, cementing its grassroots powerbase and boosting its quest for power nationwide.

Despite FN failing to grab its first region, Le Pen will still use her party’s first-round breakthrough performance as a springboard for her bid for the 2017 presidential election.

Addressing her supporters, Le Pen presented her party as the victim of “calumny and defamation” by the government who she said had “intimidated and infantilised” voters by teaming up with its rivals on the right to keep FN out of power. She said her party’s rise was inexorable.

She said the tactical voting by leftwingers who chose Nicolas Sarkozy’s rightwing Les Républicains party in order to put up a “barricade” against FN had already played into her claim that she and her voters were the victims of an elitist system that persecuted them. She vowed during the campaign that her voters would take their revenge by turning out in even greater numbers during the presidential campaign.

Le Pen herself failed to capitalise on her high first-round score in the vast northern region of Nord-Pas-de-Calais-Picardie, after the Socialist party pulled out of the race and made an extraordinary plea for its voters to choose Sarkozy’s candidate Xavier Bertrand just to stop Le Pen. First estimations showed that Bertrand, Sarkozy’s former employment minister, won with a resounding 57% of the vote, with Le Pen taking 42.8%.

In an emotional speech, Bertrand said it was not his “victory” and implored the political class to reinvent itself to counter the rise of FN.

Le Pen’s 26-year-old niece, Marion Maréchal-Le Pen, 26, an MP and rising party star hoping to lead the southern region of Provence-Alpes-Côte d’Azur, was also kept out by the tactical voting of the left for another Sarkozy candidate, the hardline mayor of Nice, Christian Estrosi. First estimations showed he had won by about 54.4%.

The defeat of both the Le Pens showed the difficulty of a far-right personality to get past the 50% threshold when faced with a mainstream candidate. This is crucial to the presidential election where Le Pen is expected to make it to the second-round run-off.

Turnout was up by around seven percentage points on the first-round, especially in areas where FN could have won, suggesting a strong mobilisation to beat the party. There had been a marked rise in requests for proxy votes between the two rounds.

Partial results showed the left had performed better than expected, likely to win five regions. Sarkozy’s rightwing party Les Républicans were likely to win six, a poorer showing than might have been expected for the main rightwing opposition party, given that two of those regions were won with the support of tactical leftwing voters. But Sarkozy’s party succeeded in winning the Paris region from the left.

The outcome appeared to comfort the Socialist prime minister’s tactic of agressively warning of the damage FN could cause. He had warned that if FN won, it would foster divisions and “this division could lead to civil war”.

He called it a party that “didn’t love France”, that cheated French people and that would bring the country to its knees. The Socialist party leader Jean-Christophe Cambadelis had also warned that FN would be like returning to the wartime Nazi-collaborationist Vichy regime except “under Vichy it was the Jews [who were targeted]. Now it’s Muslims.”

Le Pen had slammed the tactics and political manoeuvering as undemocratic, accusing her opponents of “intellectual terrorism” in seeking to block her party’s path to power.

FN was once simply content with attracting protest votes for the gruff ex-paratrooper Jean-Marie Le Pen, but it has radically changed strategy since his daughter Marine took over in 2011, seeking to build a base of locally elected officials to target the top levels of power.

Her strategy is to take positions of power across the country. She hopes the good first-round showing, despite not winning any regions, will boost her chances in the 2017 presidential race where polls suggest she could knock out a mainstream candidate and reach the second-round runoff.

Le Pen has led a drive to detoxify the party and move away from the racist, jackbooted, antisemitic imagery of the past. But the party’s hardline positions on Islam and immigration remain unchanged. Since the Paris terrorist attacks last month, FN’s key concerns – the refugee crisis, security, the place of Islam and national identity – have become the main talking points in France, personally benefiting Le Pen.

FN sought to capitalise on the sense of disaffection with the mainstream political class, high unemployment, inequality and social despair in a range of areas from rural villages to the northern rustbelt. The party had also capitalised on the migrant crisis, particularly in Calais where thousands of migrants are camping in squalid conditions in the hope of reaching Britain